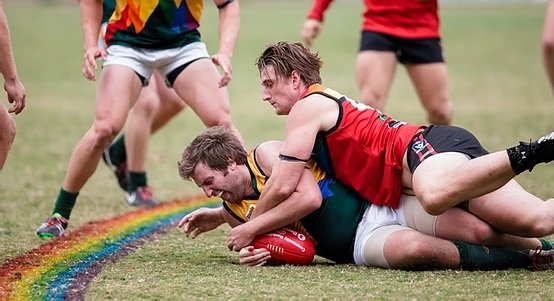 Two studies have found male athletes on sport teams that hold pride games use much less homophobic language. The first study collected data from an international sample of players (a quarter from North America) on all eight teams in the semi-professional Australian Ice Hockey League (AIHL). The researchers compared homophobic language use and attitudes toward gay people of the players on the two teams that have held pride games with those of players on the six teams that have not held the games.

The hockey study found large, and statistically significant differences in the use of homophobic language between hockey teams. One third (38%) of hockey players on teams that have held pride games self-reported using homophobic slurs such as ‘fag’ in the past ‘two-weeks’ compared to 61% of players on the teams that have not held these games.

A separate study examined the use of homophobic and sexist language by amateur male athletes in three sports (cricket, field hockey, and Australian football). It randomly selected six community sport clubs that have held pride games and received education following a model developed by an Australian charity called Pride Cup (adapted from the approach pioneered by the NHL). These clubs were compared to six clubs that have not held pride games or received education.
https://www.youtube.com/embed/S31XAVfxSQk?autoplay=0&mute=0&controls=1&origin=https%3A%2F%2Fsportinclusion.wixsite.com&playsinline=1&showinfo=0&rel=0&iv_load_policy=3&modestbranding=1&enablejsapi=1&widgetid=1

The study found similar differences in language use to the hockey study, but also found clubs that held the games used less sexist and racist language and had more positive attitudes toward transgender people. The differences seem to be primarily attributable to the pride game participation and education.

For more on the Pride Cup approach watch the video above or to download the handbook: https://pridecup.org.au/

The research can be found in the links provided in the article.